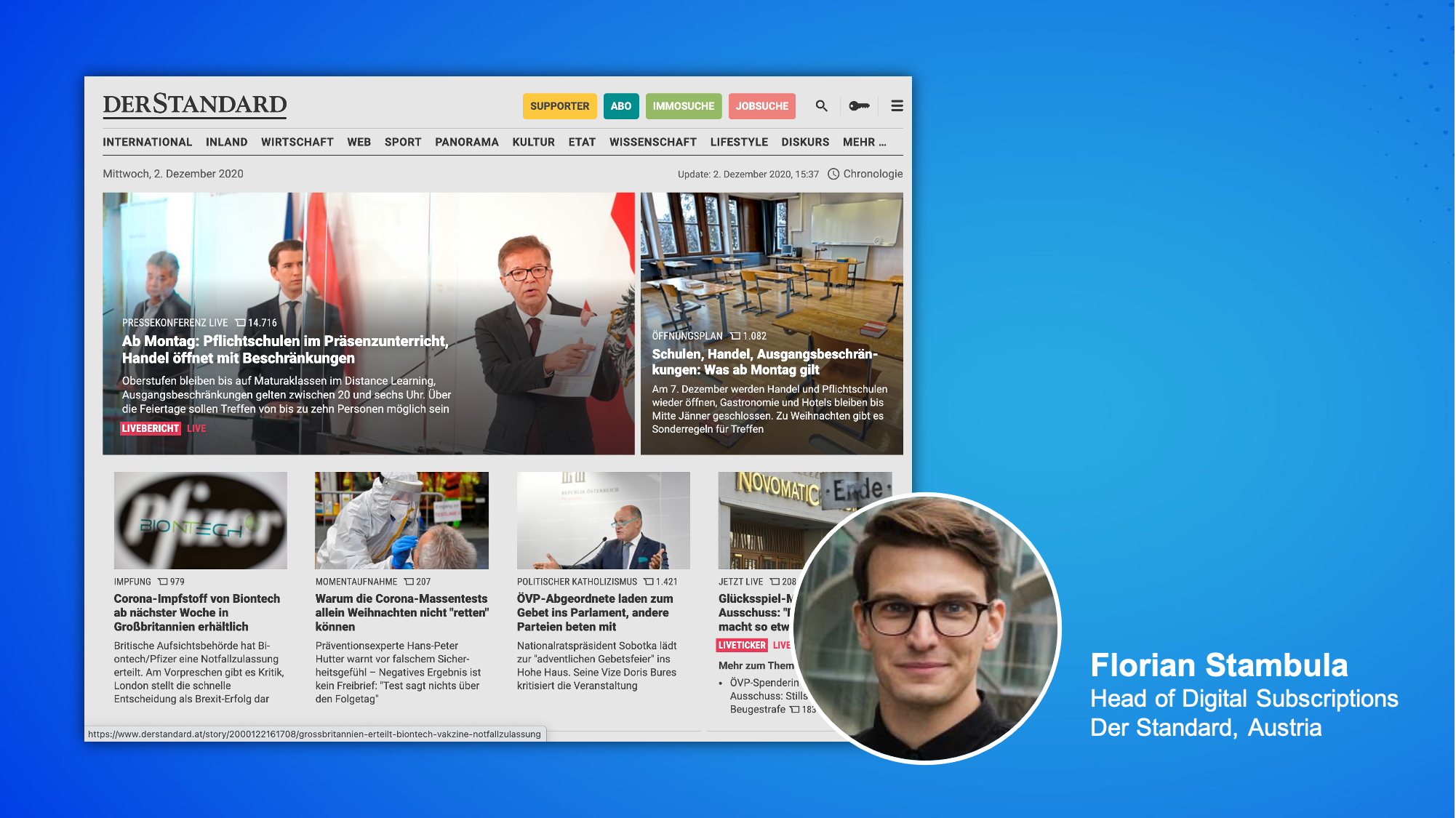 About three years ago, Der Standard, a leading daily newspaper founded in 1988, was trying to achieve three main goals:

“On average, about 25 percent of traffic blocked all advertising and for some parts of the website the ad blocking rate went up to 35 percent.”

Additionally, the introduction of GDPR was fast approaching, and Der Standard, like many other news organisations, wasn’t sure what that would mean in practice and how key principles of the regulation would be interpreted by authorities.

Der Standard was also dealing with a decline in print subscriptions, with print revenue mainly staying up due to frequent price hikes.

“We started thinking about new digital products that would leave all our journalism free to read but would give our users something valuable they would be willing to pay for,” Stambula said.

As a solution to these three main issues, Der Standard soft-launched the subscription “Der Standard PUR” in 2018, and rolled out an ad blocking wall on its website in several steps. At 7 EUR a month, PUR is a completely ad-free experience that doesn’t track users (except for very few technical cookies and scripts), Stambula said.

Users were able to choose between disabling their ad blocker and consenting to tracking and advertising or taking out a PUR subscription to read ad and tracking free. Most users using an ad blocker simply disabled it, but about 1 in 20 users took out a subscription.

The ad blocking rate fell rapidly while traffic did not decrease at all. All ad blocking traffic became new monetisable inventory, amounting to several 100,000 euros per year. 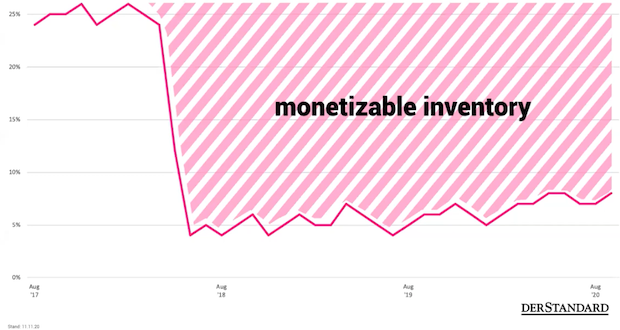 “Going into this, some argued that users with ad blockers would leave us in droves and never come back. But that’s not what happened at all,” Stambula said.

In fact, many publishers in Germany later followed suit and launched a similar model, offering users a choice between giving their consent or taking out a subscription that disabled all tracking and advertising.

Since the launch, Der Standard added 11,000 new PUR subscribers to its existing 70,000 print subscribers, receiving a bump in subscriptions when it bundled PUR with the weekend print edition at a competitive price.

“So far, we grew almost 100 percent year-over-year in revenue since the launch and we have a 59 percent retention rate for subscribers after 12 months,” Stambula said.

Paywall or no paywall?

Der Standard has also been playing with the thought of launching a paywall, but ultimately opted for a Guardian-inspired model instead.

More than 20 percent of its revenue comes from digital advertising, and about 50,000 monthly active users write more than 1.2 million user comments per month, driving half of Der Standard’s online traffic. Additionally, its mission aims to provide quality journalism and a place of public discourse to as many people as possible.

“So the question was whether a paywall wouldn’t put all three of these things at risk, so we wanted to try something else and took a page from The Guardian that had been quite successful with it,” Stambula said.

“We started a small project called Der Standard Supporter whereby users could contribute money and become Standard Supporters and receive basically nothing but our gratitude, but no content would be behind the paywall.”

Users can choose between a recurring or a single contribution, and either select a default amount or decide themselves how much they want to pay.

The initial phase of the project lasted about six months, with Der Standard targeting a very small audience to find out if it’s feasible to pursue it, and what it takes to scale it.

“Step by step, we increased the audience that was exposed to those messages and we always aimed for about a one percent conversion of the group that was targeted. If you hit this target, then we would go on and the project would continue, and we would increase the audience.”

COVID-19 and the project’s progression

When COVID-19 hit and Austria went into its first lockdown, advertising revenue essentially stopped for a couple of weeks, and the company faced tremendous economic problems, Stambula said.

In response, Der Standard quickly ramped up the contribution messages, making them more widespread and visible on the website.

“Revenue spiked basically for a couple of weeks,” he said. “After this phase in March and April, our target became to make contribution revenue more sustainable. We had received a lot of feedback and learned a lot over the previous months, so we knew we had to do some homework, like making it easier for people to pay repeatedly or making it more transparent what we would do with the money.”

This year, some 450,000 euros have come in via the Supporter project, and Der Standard is currently on a run rate of about 15,000 euros per week in contributions. Some 10,000 people have donated money, with a quarter of them doing so with recurring contributions.

“So far, contributions account for less than one percent of our revenue but we hope to grow it into a sustainable revenue stream over the next couple of years,” Stambula said.

“But for the next couple of months, we will still treat it as kind of a discovery product, just trying to learn and trying to understand as much as possible about why users contribute, what their problems are, what would make people contribute again, and just build it up from there.”