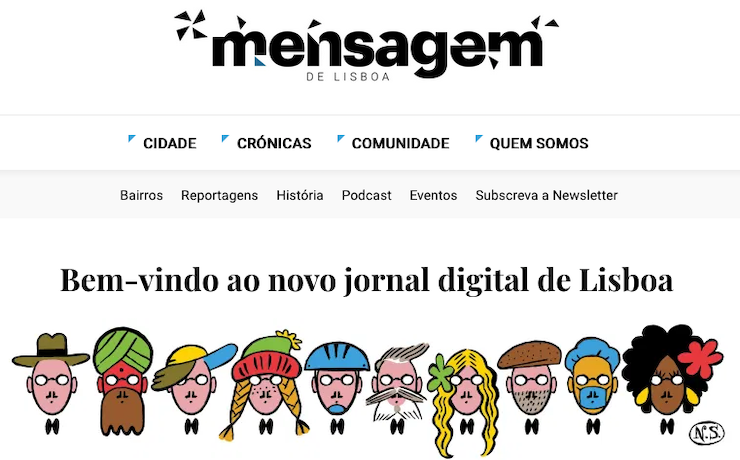 The project began to take shape in spring last year as a joint idea between business group O Valor do Tempo, which wanted to breathe new life in the A Brasileira café in the Chiado neighbourhood where Mensagem is now based, and a group of journalists aiming to create more local journalism within Lisbon.

Covering the city’s different facets, while giving a voice to local communities is central to the project, according to Catarina Carvalho, former Executive Editor of Portuguese news organisation Diário de Notícias, and co-lead of the project.

With this in mind, every published story will have room for a response from readers, so that they can share their opinions, feedback, and more ideas. Additionally, the A Brasileira café will serve as a meeting point, and allow the team to host open writing sessions, debates, live interviews, and so on.

Carvalho said the idea for a community news site was born during WAN-IFRA’s local news initiative Table Stakes Europe, and input from TSE architect Douglas Smith, and coach Alexandra Borchardt. This crystalised while she was on a fellowship at the Reuters Institute for the Study of Journalism in October.

“I drew a lot of inspiration from places and outlets doing community work, like the Bristol Cable, Tortoise, the Bureau of Investigative Journalism, the Bureau of  Local Investigations, and Shirish Kulkarni,” she said.

“Some local US initiatives also contributed – like what they’re doing at the Philadelphia Inquirer and at the Lenfest Institute, as well as one very interesting newspaper called The Beacon, which is in Kansas City.”

Giving a voice to those who are rarely heard

“This project will listen to those who already have a voice and make it heard in the city, but above all, give one to those who are rarely heard,” Carvalho wrote in an editorial (in Portuguese).

“We want to tell the stories that aren’t told, because there is no time, because they are considered too small.

Our point of view will always be the same: that of the people of this city. There will never be a story that is too small because that is what makes up the fabric of the city.”

In addition to the core team, Mensagem will also be collaborating with a wide range of city chroniclers, journalists and specialists, and is forming various partnerships with local communities.

For example, the publication is working with students from the Lisbon School of Design, and counting on six women from the NOVA University’s social communication course to act as neighbourhood correspondents. A collaboration with NOVA University’s Information Management School on a local news automation project is also in the works.

Mensagem has received a grant from the Facebook Journalism Project, and is participating in Newspack, a project from WordPress.com and the Google News Initiative, that aims to help small newspapers run their sites on WordPress.