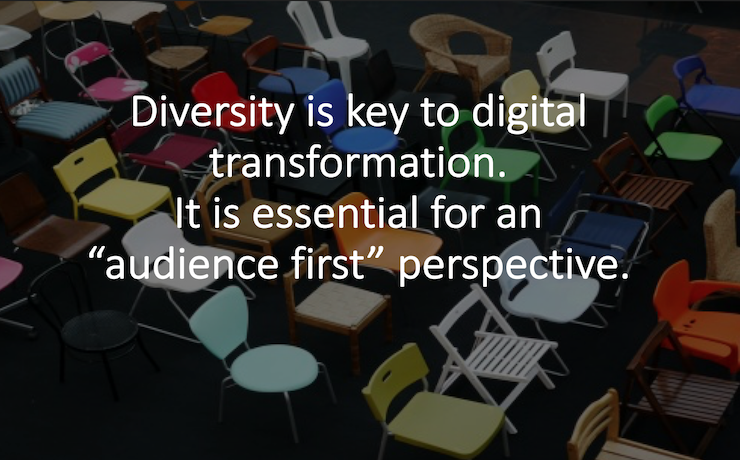 Although diversity has been getting more attention lately, it seems many news organisations still have a long journey ahead of them in order to become truly diverse and inclusive – particularly at the senior management level.

A 2021 study from the Reuters Institute for the Study of Journalism showed that while 40 percent of journalists across 240 major outlets in ten markets were women, only 22 percent held top editor positions. Meanwhile, German association ProQuote conducted a study in 2019 among news organisations in Germany, which revealed that regional news brands had the lowest share of women leaders – a mere 10.2 percent. In magazines, on the other hand, women held 48.9 percent of leadership positions. 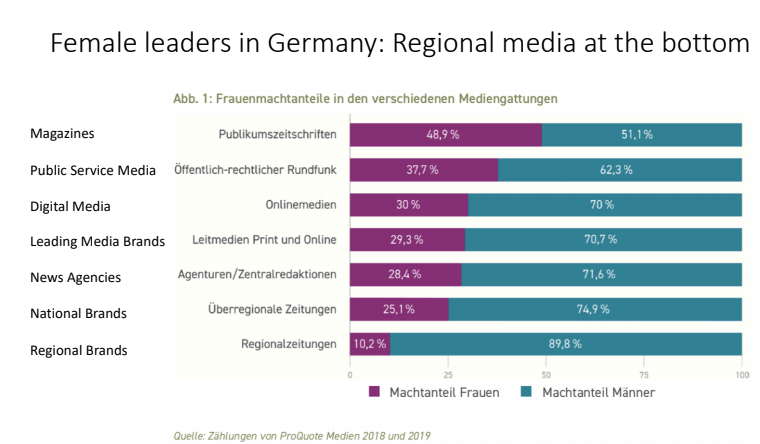 In a following qualitative study published just recently, women editors and reporters were outspoken about the reasons. They talked about “self-stabilising all-male leadership circles” and the lack of perspectives for advancement.

Gender diversity is ‘a problem of status’

“Gender diversity is not a problem of numbers but of status,” Dr Alexandra Borchardt, a Table Stakes Europe coach and Senior Research Associate at the Reuters Institute for the Study of Journalism, told participants, referring to a study on talent and diversity in the UK, Germany and Sweden she led in 2019. She also produced a guide featuring ten recommendations to tackle the talent and diversity challenge.

According to Borchardt, news organisations struggle most when it comes to achieving ethnic and racial diversity. A 2020 RISJ poll of newsroom leaders from around the globe (of whom 61 percent were men) found that 43 percent believed their news organisation was doing a good job in terms of ethnic diversity, compared to 80 percent who felt the same way about gender diversity.

Borchardt pointed out that the results weren’t representative as the poll was conducted among a strategic sample of select news industry leaders, adding that those who participate in this type of survey often tend to lead more progressive newsrooms. Hence, a representative sample might reveal a different picture.

But why should news organisations care about diversity in the first place?

TSE architect Doug Smith further drove home this point, arguing that having diversity and inclusion, in particular, is integral in an audience-driven world.

“Having the statistics of different categories of people is extraordinarily important, but if you don’t have an inclusive approach to journalism it isn’t good enough,” he said. “It certainly isn’t good enough to attract particular types of audiences.”

Producing diverse and inclusive journalism starts with hiring, retention, and advancement, ensuring people from diverse backgrounds are represented and given a voice in the newsroom.

“Think about who the sources for a story are, what the perspectives that will be covered are, what voices there will be, and what context of understanding will be provided,” he said.

“From the moment a reporter pitches a story, the question becomes whether you are operating in a way that maximises or minimises getting all those things.”

This aligns with the view of TSE coach Stéphane Mayoux, a former BBC editor, who shared three criteria designed to help build an inclusive environment that fosters belonging – regardless of gender, ethnicity, or class.

The three criteria are representation, influence, and reward.

While improving representation of people from diverse backgrounds is a crucial first step, Mayoux pointed out that “having someone at the table will not necessarily change your content and help you be more in touch with your diverse audience. There needs to be influence.”

By looking at the different voices present, at the influence that they have, and at the ways they are being rewarded (be it financially or in terms of praise, promotion, and opportunities), news organisations can assess at what stage of inclusion they find themselves.

Diverse voices at the BBC

One organisation that has been making a concerted effort to produce more diverse content that better reflects society is the BBC, which created a special unit focused on creative diversity in 2019 following the success of its 50:50 Project.

The 50:50 Project, which started out as a grassroots initiative led by Outside Source presenter Ros Atkins in 2017, has become the corporation’s biggest collective action aimed at improving women’s representation in content to date. Participating teams independently monitor the number of men and women contributors in their programmes, and act on that data with the goal of achieving a 50:50 split.

The business case for diversity

The project’s methodology is underpinned by three core principles: collect data to effect change, measure what you can control, and never compromise on quality.

“At the end of the day, it’s all about ensuring that the audiences are getting the best product they can,” said Nina Goswami, Creative Diversity Lead for the 50:50 Project and News.

While the BBC has a charter obligation to be representative of the UK’s society as it is today, Goswami said there is good reason for any organisation to make the effort.

In the BBC’s case, a survey of a representative sample of some 2000 BBC online users revealed that 40 percent of 16-34 year-olds enjoyed content more, and 32 percent of women aged 25 to 34 consumed more content.

“That to me is the business case that shows why making sure our products are reflective of women is important,” Goswami said. “You are attracting them to your product and to your content.”

By now, more than 600 BBC teams are participating in the project, and the corporation is working with more than 80 partners, including businesses and universities, in 24 countries.

Additionally, the BBC is now extending the 50:50 approach and methodology to encourage the use of more diverse commentators, including people with a disability and those from Black, Asian, and minority ethnic communities, with plans to share results externally in 12 months.