So, how does one create an effective newsletter? Like nearly everything else in the news industry, there is no one-size-fits-all approach, but there are a number of key factors for success.

Chief among these is to know your audience and to keep learning about them. This can be done through surveys and regularly analysing data on the articles they click on and the ones they don’t.

Publishers should also routinely ask newsletter readers for their opinions, advice and feedback in a variety of ways as well as encouraging reader-generated contributions through, for example, regular photo features (Photo of the Day, etc).

Those are just a few suggestions shared by Benjamin Quiring, Head of Editorial Development at Germany’s Kölner Stadt-Anzeiger, and Ashley Hoffman, Newsletter Strategist, of the US-based Philadelphia Inquirer, during WAN-IFRA’s “The art of creating engaging newsletters,” webinar in early June, which drew some 120 participants from six continents. 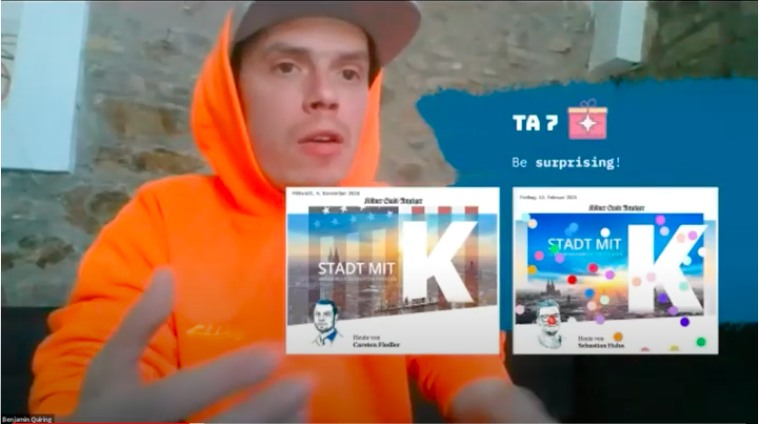 Based in Cologne, the country’s fourth largest city, Stadt mit K, which translates as “City with K,” (in German, Cologne is spelled Köln) launched in February 2020 and now has around 45,000 subscribers. Quiring said their open rate is 42 percent, “so about 20,000 to 25,000 people read it every day.”

Having a frequent, and early, publication time is clearly important for both publishing houses.

Stadt mit K and the Philadelphia Inquirer Morning Newsletter, which has 170,000 subscribers, are each published daily.

Both speakers said their newsletters are planned to reach readers’ inboxes around 7:00 am.

Quiring also encouraged participants to make it as easy as possible for people to subscribe to the newsletter by not requiring excessive amounts of details. “To be successful, an email address is all you need,” he said.

When it comes to the content, both speakers said they aim to put their very best journalism from all sections of their newsrooms into their newsletters.

“The thrust of the newsletter is to really get people to read the entire feature story on Inquirer.com,” Hoffman said. “It’s very good for building habit for both subscribers and non-subscribers who can sample our very best journalism.” 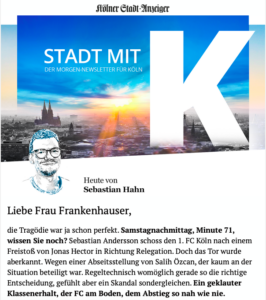 Quiring recommended having a mix of different sections.

“Our newsletter is built on different sections, and there are three sorts of sections,” he said. The first is fixed sections, which include an editorial and a pull quote, and a Picture of the Day.

“People send their pictures of the city to us and we publish them in the newsletter,” he said.

Stadt mit K also has regular daily features including: Corona cases and numbers, Things to do during the pandemic, Long read of the day, and a fun fact about Cologne.

They also have non-regular sections, recurring sections that include:

Thirdly, they have special sections for certain days, such as economy or culture. “We had an advent calendar in December and every day there was a raffle to win Christmas presents if you subscribe to the newsletter,” he added.

Publishers should also keep in mind that creating successful newsletters requires a regular, substantial time commitment from a dedicated team. 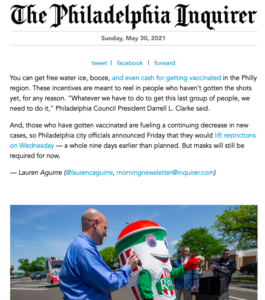 “This is a very time-intensive process,” said Hoffman. “It might look fun with all the pictures in the end, but it’s gruelling and people are working very, very diligently at the Inquirer to make sure that every turn of every story is thoroughly checked and up to our standards.”

“At The Philadelphia Inquirer, newsletters are very formally embedded in the way that we all work together,” she continued. “We have very high standards for the portfolio and that is so wonderfully foregrounded and reinforced by the leadership because it’s technically ‘extra.’

She added that it’s crucial in terms of getting everybody’s buy-in to show them the results, and how well their work is doing.

“You can spam a million people on social media and other important platforms that we need to keep growing on, but to have that sort of door-to-door inbox connection, delivering what people asked for and having their emails, I think that’s going to be so vital to that long term connection surviving,” she said.

With emailed newsletters, the subject line is incredibly important for the open rate, so it’s essential to make it as enticing as possible.

First, they have a newsletter channel brainstorm that begins with a thorough read of the story for the thrust of the piece to present to our audience.

Next, they come up with a list of subject lines, usually five.

Then, whoever is available from the main newsletter team of about six people votes to pick the favourite.

The winning entry is recognised with an emoji trophy.

Both speakers repeatedly returned to the theme of how essential it is to listen to the audience and encourage regular feedback from them.

“It is really important to listen,” said Hoffman. “It is constant. You are heat-mapping these newsletters every day to see what people actually desire. We want to surprise and delight them and not just inform them. And often they will surprise us. It’s constant, constant tending that garden, and not ‘Ok, this is who our audience is. This is what they like.’ It’s evolving.”

The Philadelphia Inquirer and Kölner Stadt-Anzeiger are both part of the Table Stakes community. Table Stakes is a programme primarily conceived for local and regional news organisations to help drive digital revenue growth by re-focusing on audienceS.

The Inquirer was an early participant in the original US version of the programme, and Kölner Stadt-Anzeiger has been a participant of the Table Stakes Europe programme, which is a collaboration of WAN-IFRA and Table Stakes architect Doug Smith in partnership with the Google News Initiative Digital Growth Programme.

“The mentality of Table Stakes is audience first,” noted WAN-IFRA’s Nicole Frankenhauser, who moderated the webinar.

‘Imagine that you are writing to friends’

Additionally, newsletters offer publishers a chance to connect with their audiences in a less formal, more personal way.

“Newsletters aren’t newspapers or news websites,” said Quiring. “Imagine that you are writing to friends. Ask them questions. Respond to their questions if they write to you. Ask for their knowledge, ideas, pictures, tips, etc. And you can build up on that and start the next morning briefing with the ideas.”

He also recommended that publishers should “try out new things every month to keep the newsletter alive. And if they don’t work, or you get bad feedback, you can change it the next day.” 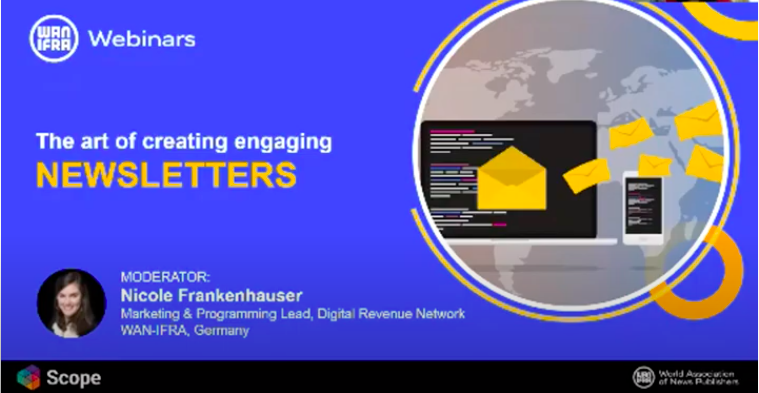 Members-only exclusive: WAN-IFRA Members can access a recording of the webinar by clicking here.