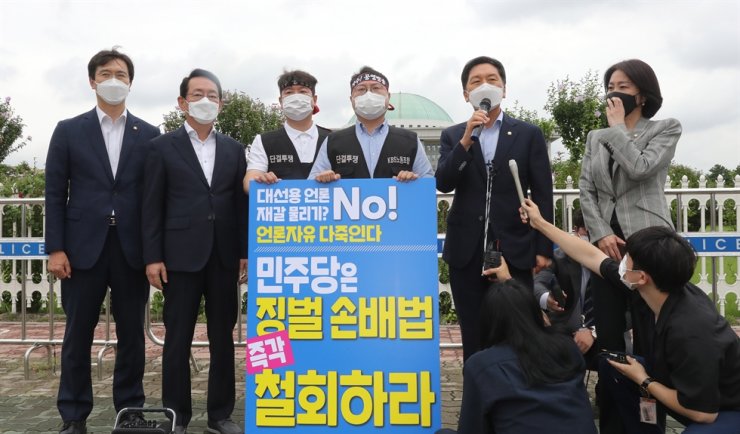 Opposition leader in front of the National Assembly protests against the revision of the South Korea's Media Arbitration, Aug 2, 2021 (Image Korea Time / Yonhap)

Proposed changes to an arbitration law governing the media will impose disproportionate, punitive fines on publishers for any content deemed “fake news”. Those purportedly harmed can claim compensation amounting to five times the financial damage suffered.

The changes to South Korea’s Media Arbitration Act were endorsed in late July by lawmakers of the ruling DPK and a liberal minor opposition party member on a subcommittee of the National Assembly Culture, Sports and Tourism Committee. The main opposition People Power Party (PPP) member boycotted the vote in protest. Still, the government plans to push the revision bill ahead of other procedures so it can be passed at an Aug. 25 Assembly plenary session.

WAN-IFRA expresses its strong reservations about the procedure followed by the government and the haste with which it plans to legislate against a complex and worrying societal phenomenon. WAN-IFRA is also extremely concerned about any attempt to determine, in the context of this bill, the criteria characterising the intention to publish so- called “fake news”. This would inevitably lead to abuses of interpretation that are detrimental to the freedom to inform. The risk of over-regulation is extremely disturbing and could infringe on the freedom of the press guaranteed by the South Korean Constitution.

“This kind of regulation, promoted by some of the world’s most authoritarian regimes, is often an expedient tool used to silence criticism of political and economic power and thus undermines press freedom,” said WAN-IFRA CEO Vincent Peyregne.

WAN-IFRA has joined forces with a coalition of six national media organisations, including the Korean Newspapers Association (KAN), the Korea News Editors’ Association, and the Journalists Association of Korea, to push back against the Bill which would overstep constitutional guarantees.

“If this change were to go ahead, the South Korean government would be joining the worst authoritarian regimes tempted by reforms of the same order, which are in fact designed to curb free critical discussion,” concluded Peyregne.

The World Association of News Publishers, or WAN-IFRA, is the global organisation of the world’s press. WAN-IFRA’S core mission is to protect the rights of journalists and publishers around the world to operate independent media. It provide our members with expertise and services to innovate and prosper in a digital world and perform their crucial role in society. WAN-IFRA derives its authority from its global network of 3,000 news publishing companies and technology entrepreneurs, and its legitimacy from its 60 member publisher associations representing 18,000 publications in 120 countries.

WAN-IFRA strengthens its presence in Spain and Latin America