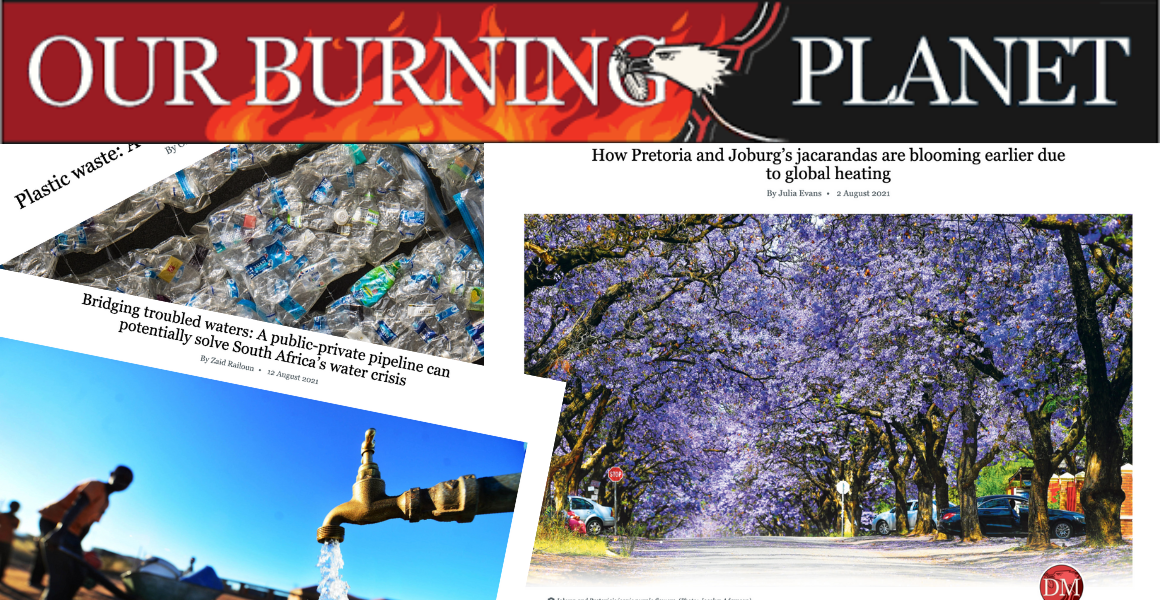 In 2018, Cape Town nearly ran out of water. Three years of drought left the city 90 days away from “day zero” when municipal water systems would be shut down. The following year a new IPCC report highlighted what the impact of a 1.5℃ increase in temperature would mean for the Earth – and everyone living on it.

“That moment spurred us into action,” says Green. “Two senior writers had been writing about some of the climate crisis issues at the time, but we had the idea that we needed to put a hyper-focus on climate crisis reporting.”

Originally launched in 2019, Our Burning Planet is a specialised team within the Daily Maverick’s newsroom. It now publishes three to six articles a day depending on the story and format, including news coverage, report analysis and major investigations, as well as opinion pieces and commentary from external contributors. New funding secured in 2021 has grown the unit to 10 journalists, including nine writers. The team is a mix of experts in a range of climate topics, from biodiversity and ecosystems reporting to energy, to more junior reporters as Our Burning Planet seeks to grow “the next cohort” of climate crisis reporters.

“Given the strictures that newspapers and media organisations have on their resources, there’s often not a space for writers to truly specialise in a field,” says Green. “We want to focus on building capacity and knowledge within particular reporters so that they become the next champions of the cause, the next experts.”

Building this capacity is crucial to both move climate crisis reporting beyond “surface level and the reactionary” and to Our Burning Planet’s commitment to use its high-end journalism to “address humanity’s greatest challenge”, says Green. The team’s editorial focus is shaped by original research commissioned from Wits University to identify the five most important risks to South Africa in terms of the climate crisis. These risks (energy transition, water insecurity, food insecurity and agricultural production, ecosystems and biodiversity, land and land use) inform how the unit assigns its resources. Investigations into the rhino trade, the changing ecosystems of Table Mountain, stockpiling of toxic waste and more have followed.

“When people hear the words climate change, everybody immediately thinks about increasing global temperatures, but the climate crisis reaches far beyond that. When you start drilling down into the issues, you start to see these five risks,” says Green.

Our Burning Planet wants its journalism to help the public, civil society organisations, business leaders and governments understand the urgency of the climate crisis and to “spur action”. The plan is to reach as many people as possible, but not just those who are already engaged with climate issues.

“We want to reach people for whom the climate crisis is not something that’s on their radar because they are focused on how they are going to survive day-to-day,” says Green.

“It’s the trickle-down of information from the government who make policy decisions, right down to the guys on the street looking for plastic to recycle to pay for their next meal. It’s that funnel of influence that we’re trying to reach.”

Everyday examples of the impact of the climate crisis can be particularly effective to this end. Tracking the blooming of jacaranda trees that arrives earlier each year in Pretoria, for example, and using data to show that this is a result of the climate crisis is “a real-life example” that helps people see what’s happening now and not in a “way out future”.

Trying to access audiences beyond the Daily Maverick’s core readership, in particular people who have less access to the internet or internet-enabled devices, is a challenge. Partnering with community radio stations and making all Our Burning Planet content free to republish under a Creative Commons licence are just two of the ways the team is trying to meet people where they are.

Green hopes plans for more solutions-focused stories will also allow Our Burning Planet to make an impact and engage people differently with both its journalism and the crisis at hand. The Our Burning Planet Solutions strand will allow readers to share what they are doing to mitigate against the climate crisis. Its first piece of reader-generated journalism is now live.

“People need to feel that they can do something, no matter how incremental it is for them and the greater impact,” says Green, who hopes that solutions stories will give readers a sense of agency in the face of a crisis that can feel overwhelming.

Whether a citizen, business or political leader, there’s no better time to act than now, says Green: “The work we do at Our Burning Planet isn’t about saving the planet, it’s about saving humanity. You have to save your home because, if we send this one into complete meltdown, that’s on us – we don’t have anywhere else to go.”

The author of this article, Laura Oliver, is a UK-based freelance journalist. Twitter @LauraOliver

WORLD NEWS DAY is a global campaign, organised by the World Editors Forum and Canadian Journalism Foundation, to draw attention to the value of journalism. On 28 September 2021 more than 300 newsrooms will showcase the work they are doing on climate change. Join the campaign.