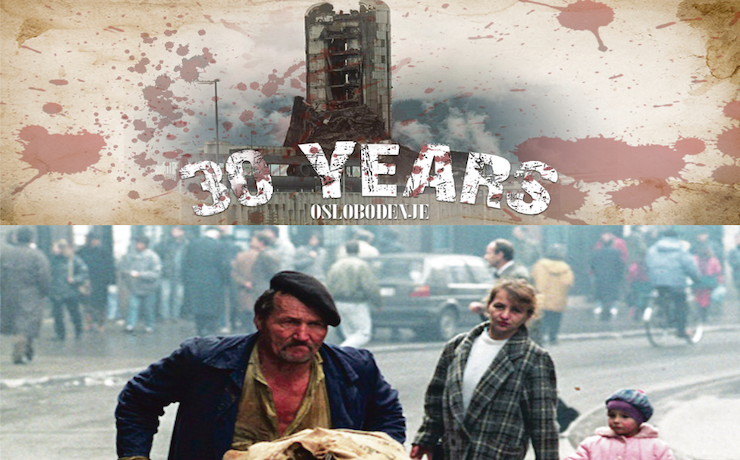 Oslobođenje special: A reporter has to determine the ground truth

As war rages on in Ukraine, Oslobođenje’s special edition about the Bosnian War and the post-war period comes as a testament to the importance of journalism during armed conflict, and acknowledges the courage and resilience displayed by Oslobođenje’s staff in the 1990s.

The special edition, available in English, can be downloaded here.

Founded in 1943 as an anti-Nazi newspaper, Oslobođenje was forced to operate out of a makeshift newsroom in a bomb shelter after its offices were bombed and destroyed during the Bosnian War.

A reminder of atrocities, and a tribute to Oslobođenje’s journalists

“During the war, the Oslobođenje newspaper managed to reach its readers every day but also tell the story of Bosnia and Herzegovina to the world,” said Editor-in-Chief Vildana Selimbegović.

“Our archive is a monument of heroism and a witness to the survival of Bosnia and Herzegovina during those traumatic times.”

Oslobođenje received numerous accolades and awards for its courageous and tenacious coverage of the war. The special edition, which focuses on a number of different acts committed during that period, from the siege of Sarajevo to the Srebrenica massacre, serves as a reminder of the atrocities, hardships, and anguish the people of Bosnia and Herzegovina had to endure. It also explains the role of the paper during these times and pays tribute to the paper’s editors and journalists who reported from the front lines.

“The siege of Sarajevo is a symbol of the suffering of the capital city of an independent state, which we pay due attention to, but we also want to open our pages to remind everyone of the siege of other cities in our country,” Selimbegović said.

‘Human suffering is the essence of every war story’

With war unfolding in Ukraine, Oslobođenje’s special edition is even more important, she said, and shared her advice for journalists currently reporting on the conflict.

“The most important thing, also in the war, is to stay human. For me, being a journalist has always meant telling a story about those whom it concerns – and these are always ordinary people. During the siege of Sarajevo, for example, women were more well-groomed than ever, it was resistance, defiance of the horrors of war, shortages of electricity, water, food, and everything else.

“A few years ago, I was an instructor to Syrian journalists and they asked me every day: ‘How was that possible?’ My answer was the same every day: hatred has never helped anyone, it is important to think about people and their suffering, to tell their stories, and human suffering is the essence of every war story. In Sarajevo in the 1990s and in Ukraine today.”

Informing the world while upholding morale

With the edition, Oslobođenje also aims to emphasise ways of defence, and highlight the contributions of Bosnians and Herzegovinians, while offering lessons to Europe and the world that have become all the more relevant against the backdrop of the war in Ukraine.

The initiative also serves as an opportunity to pay tribute to Oslobođenje’s then Editor-in-Chief Kemal Kurspahić, who passed away in September of last year, for his dedicated work during the war and his relentless fight for press freedom.

Oslobođenje has invited a range of journalists, photographers, academics, and foreign correspondents to contribute commentary, with many of them lauding the role the newspaper played in bringing information to the country’s people and to the world, and in upholding the morale of those affected by the war.

As part of the initiative, Oslobođenje’s TV channel, O Kanal, also prepared a special segment with guests and contributors to commemorate the event. 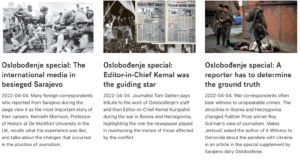