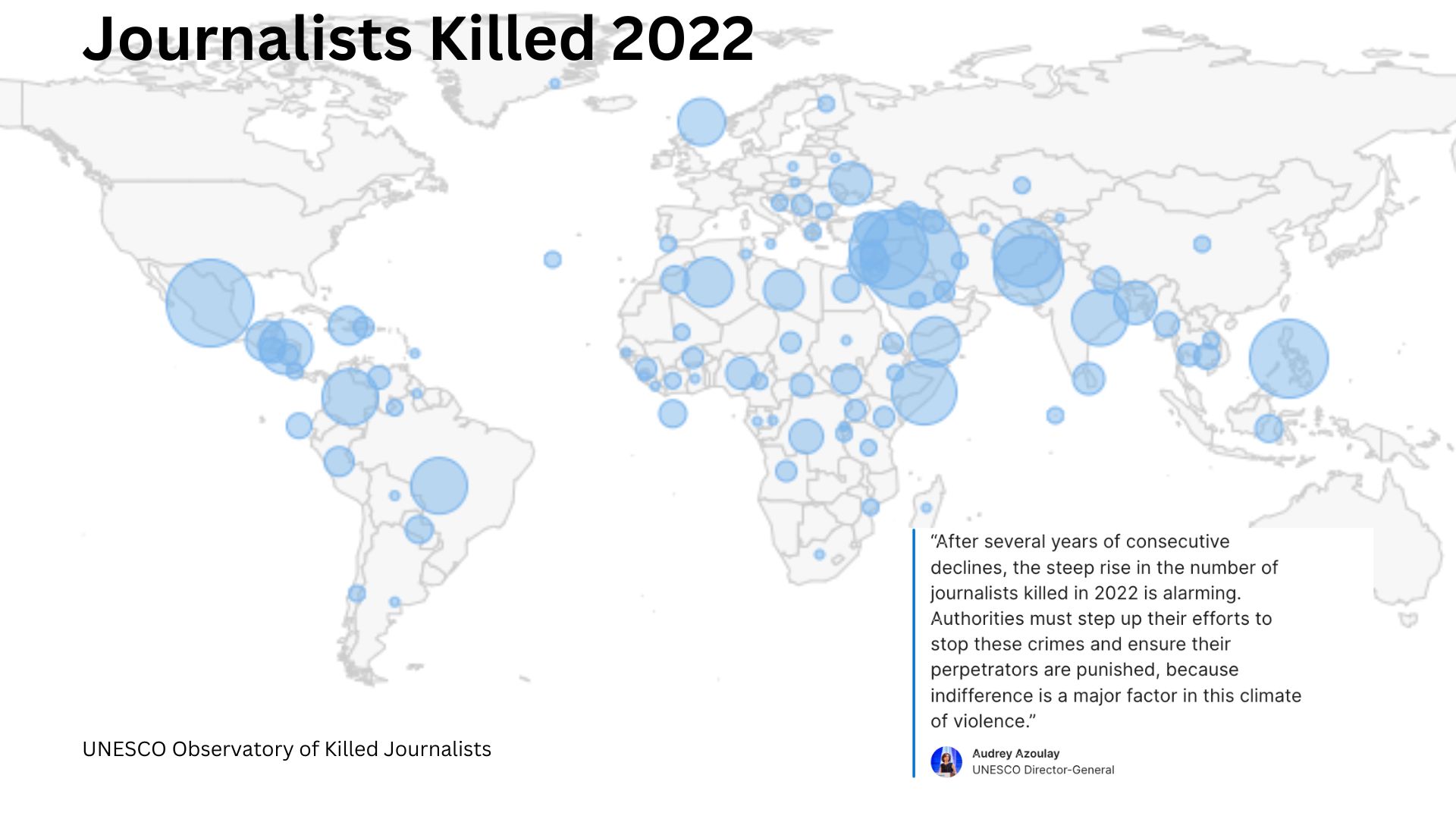 The spike in killings in 2022 marks a dramatic reversal of the positive trend seen in recent years: from 99 killings in 2018, the number had dropped to an average of 58 killings per year from 2019-2021, according to the UNESCO Observatory of Killed Journalists. These numbers are a reminder of the growing fissures in rule of law systems worldwide, and highlight states’ failure to fulfil their obligations to protect journalists and prevent and prosecute crimes against them.

While all regions were affected, Latin America and the Caribbean was the deadliest for journalists in 2022 with 44 fatalities, over half of all of those killed worldwide. Asia and the Pacific registered 16 killings, while 11 were killed in Eastern Europe.  The deadliest individual countries were Mexico (19 killings), Ukraine (10) and Haiti (9).

Half of journalists killed off duty

Around half of the journalists killed were off duty at the time they were targeted: while travelling, in their homes, or in parking lots and other public places where they were not on assignment. This implies that there are no safe spaces for journalists, even in their spare time.

While the number of journalists killed in countries in conflict rose to 23 in 2022, compared with 20 the previous year, the global increase was primarily driven by killings in non-conflict countries.

This number almost doubled from 35 cases in 2021 to 61 in 2022, representing three quarters of all killings last year.

These journalists were killed for a variety of reasons, including reprisals for reporting on organised crime, armed conflict or the rise of extremism, and covering sensitive subjects such as corruption, environmental crimes, abuse of power, and protests.

While there has been some progress in the last five years, the rate of impunity for journalist killings remains shockingly high at 86%, creating a chilling effect for the work of journalists and risking freedom of expression worldwide. This proves that combating impunity remains a pressing commitment on which international co-operation must be further mobilised. In addition to killings, journalists continue to be threatened with multiple forms of violence ranging from enforced disappearance, kidnapping and arbitrary detention, legal harassment, and digital violence, particularly against women journalists. UNESCO’s World Trends in Freedom of Expression Report 2021/2022 highlights these challenges, pointing to the weaponisation of defamation laws, cyber laws, and anti “fake news” legislation, which is sometimes applied as a means of limiting freedom of speech, all of which create a toxic environment for journalists to operate in.

UNESCO is the United Nations agency with a mandate to ensure freedom of expression and the safety of journalists around the world. It coordinates the UN Plan of Action on the Safety of Journalists and the Issue of Impunity, which marked its 10th anniversary with a global conference in Vienna, Austria this year.

The organisation condemns and monitors judicial follow up to every journalist killing. It also trains journalists and judicial actors, works with governments to develop supportive policies and laws, and raises global awareness through events such as World Press Freedom Day (3 May) and the International Day to End Impunity for Crimes Against Journalists (2 November) held annually.