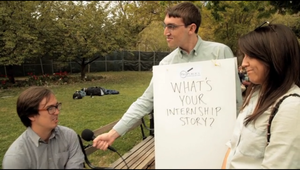 Among the U.S. Fair Labor Standards Act’s six criteria for determining a legal, unpaid internship is that the position benefits the intern, and not the employer directly, and does not displace regular employees. But many interns complain that their hard-won internships consist of just office work and provide little educational value.

Another common argument against unpaid internships is they are feasible only for students from well-to-do backgrounds, who can afford living expenses without a salary (or even afford to buy an internship). Because the unpaid internship in New York City is the repeatedly championed success model in the industry, low-income minority reporters are being shut out, often opting to abandon journalism aspirations to avoid internship debt, said David Dennis, a Northwestern University journalism school graduate.

“The journalists who can tell my story — the story of urban or inner-city America — have taken a job in marketing while disseminating their opinions on blogs, which only small portion of the general public ever see,” said Dennis, who called unpaid internships “slave labor for people with degrees” in a recent Guardian column. “This is a loss to the art of journalism and its ability to tell the whole American story.”

With low-income, minority reporters unable to afford access to internships that double as recruitment tools for publications, media is becoming increasingly homogenous, favoring a higher-income perspective, according to Dennis. He attributed underreporting of crime in New Orleans and Chicago to this class imbalance.

“Until publications find that more well-rounded reporting is more important than cutting financial corners, they’ll continue to alienate a large portion of the American population, and the stories that lay in the shadows of America’s dark corners will never come to light,” he said.

Some worry that should unpaid internships be eliminated, students will have fewer opportunities to enter their desired career field. But New York University student Christina Isnardi rebutted that reasoning in a petition to remove unpaid, illegal internship listings from a university career database.

She pointed out that, according to a study by the National Association of Colleges, 36 percent of college graduates receive one or more job offers, and 37 percent of students who participated in unpaid internships are offered a job. That suggests unpaid internships increase employment opportunities by only 1 percent, she said.

However, others argue that campaigners against unpaid internships are just “naive whelps” who are complaining without just cause. Brendan O’Neill, editor of Spiked, emphasized that the internship process is an important filter for screening potential applicants’ determination and desire to join an industry with plenty more aspirant reporters than jobs.

“This isn’t supposed to be fun. The dues do not pay you,” O’Neill wrote. He later added, “Getting a good unpaid internship and eventually getting hired afterwards requires hustle, an ability to blow your own trumpet and shamelessly self-promote, and often a bit of luck. Good things do not come to those interns who wait.”

O’Neill suggested that if internships were paid, an intern’s motivation could be misplaced.

“The whole point of interning is that it’s not about the money. It’s a display of one’s inner desire to learn, network, impress, and kiss butt,” he said. “The self-motivation of the intern is absolutely key. Add a wage packet to the equation and the motivation becomes filthy lucre rather than future advantage.”

Furthermore, in a recent column, USA Today Collegiate Correspondent David Schick equated internships to college coursework, for which students happily pay thousands. He argues that people see no problem in paying to learn or learning for free — why should internships, with educational intentions, be any different?

“To put it simply, an unpaid internship is no different from an education,” Schick said, adding that newspaper experience is often more educational than any journalism class. “And an education is something worth paying for with your time, your money — or both.”

Instead of being paid, interns are given countless other benefits: recommendation letters, clips to add to their portfolios, and real-world experience, Schick asserts. Meanwhile, companies themselves risk their reputations by offering students print space.


The National Association of Colleges data also show that 60 percent of students who participated in paid internships are offered jobs upon graduation, compared to unpaid interns’ 37 percent. This discrepancy suggests that paid interns are more likely to find career success.

“If [interns] add value to the work you create then they are worth paying for,” wrote Building Design’s Head of Digital, Anna Winston. “If they don’t [add value] then why are you bothering?”

Winston’s attitude is apparently shared by a number of employers who use internships as an employment pipeline. Companies that pay interns are more likely to hire them, according to Investopedia. In addition, a survey by the Institute on Education and the Economy at Columbia University’s Teachers College showed paid internships were “stronger in all measures of internship quality.”

Despite the heat of this controversial topic, there has been little concrete, deep research into the matter. Realizing this fact, ProPublica recently launched a Kickstarter campaign to raise $22,000 to pay an intern to help investigate the internship culture. So far, it has raised over $5,000, with 21 days remaining.

Of course, some will contend that paying the intern is bound to skew the results of the investigation.

Photo: From ProPublica’s KickStarter campaign to fund research on the internship culture.