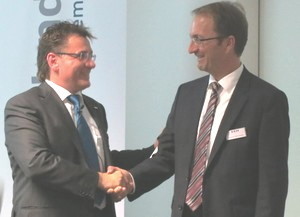 (In the photo: Eckhard Hörner-Maraß (left) and Achim Trenkner from S.E.M.)

Rotolito Lombarda in Italy, a sister company to Rotomail Italia, ordered a variable cut-off folding system FoldLine as finishing part for their digital print production of newspapers and other products. (Rotolito Lombarda owns a number of inkjet presses from different manufacturers). An extension and integration of the inline workflow system with the company’s HP T410 colour inkjet web press is planned for early 2014.

Another sale referred to a Colorman autoplate press to the Finnish company Punamusta, which produces a variety of local newspapers as well as advertising material and magazines for the Finnish, Russian, and Scandinavian markets.

Also announced was a cooperation with S.E.M. for maintenance and after-sales service for press and post-press equipment in order to provide full service to the clients.

Answering a question as to whether manroland will follow its competitor’s example and develop an inkjet press, Eckhard Hörner-Maraß said: “We live in a competitive environment; we should not try to do everything on our own. manroland prefers cooperation instead of confrontation.” In this context he mentioned manroland’s research and development cooperation with Océ that involves a test installation of a liquid toner printing machine.