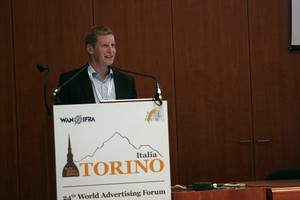 Here we take a look at five key takeaways from the Forum, most of which were stressed by more than one speaker.

Print in decline, but still main source of revenue

“The real money in newspapers is still in print – digital is our future, but it is a future not yet realised,” said Eamonn Byrne, Director, The Byrne Partnership, UK, during the opening session.

This was echoed during the Congress by WAN-IFRA Secretary General Larry Kilman in his presentation of this year’s World Press Trends who stated that globally “print still accounts for 93 percent of newspaper revenues.”

The trouble with print though is that “it’s so unsexy you can hardly talk about it,” said Staffan Hultén, Vice President and Founder, RAM Research and Analysis of Media, Sweden. Yet as his presentation made clear, print is still an incredibly effective advertising medium.

For example, Hulten explained that “advertising fatigue” across media is becoming a problem as people are getting more and more tired of ads and are increasingly turning to ad blockers for browsers, mobile and TV. However, he said, people are far less bothered by print ads because unlike the other media, people feel they have control over whether or not they look at print ads, and it’s precisely this lack of control that leads them to want to block out ads on other media.

Several speakers noted that today’s advertisers expect return-on-investment (ROI) and a much higher level of accountability than in the past.

The late 19th century US merchant John Wanamaker is credited with saying: “Half the money I spend on advertising is wasted, the trouble is I don’t know which half.” However, speaker Nic Pietersma, Business Director, Ebiquity, South Africa, who cited Wanamaker’s quote, also noted: “That doesn’t really cut it anymore – advertisers are increasingly demanding to know their advertising is working and today it is more and more possible to prove it.”

Businesses are buying into ROI, and it is increasingly governing decisions, Pietersma said.

A number of speakers mentioned the need of the industry to look at new ways of measuring its impact. We need to stop thinking in terms of how many people read us every day and focus on how many people we influence every day, said Abba Newbery, Director of Advertising Strategy, News UK Commercial, UK.

Australia-based The Newspaper Works has created an “enhanced media metrics Australia” initiative, better known as  “emma,” which surveys some 54,000 people a year. Mark Hollands, CEO of The Newspaper Works, described emma as a metric system built for the digital age, targeting both advertisers and media agencies.

Emma incorporates and examines channel planning, segmentation, broader and deeper surveys, and readership engagement for advertising and media agencies to use for business purposes. “We fuse print readership data we created with emma with Nielsen online data,” Hollands said. The metric shows the differentiation between weekday and weekend readership, allowing publishers and advertisers to gain a better insight into what their audience is engaging in during specific times.

Another key topic among speakers was the strong growth of programmatic advertising, which Danny Hopwood, Head of Platform VivaKi, EMEA, UK, said “saved digital advertising – that might sound strange – but there became so many choices that it became problematic.”

Today, “programmatic is not transient, it’s very much a stable part of the digital ecosystem,” Hopwood added, noting that programmatic revenues rose by 366 percent in Europe in 2013 and that markets are getting into the space very, very quickly. Programmatic is not something that is not going to go away, and it cannot be ignored.

Added speaker Tim Gentry, Revenue Director, The Guardian, UK, (pictured)  it’s no longer a question of should publishers get involved with programmatic, but how do we get involved? Moving forward, Gentry noted that programmatic will be either dominant or very important.

“We’ve developed something we call ‘audiences not platforms,’ which works quite well, but we can’t use it yet across programmatic, but we are working very hard to solve that,” Gentry said.

“Tablet advertising is giving a very, very good yield. That is something that is similar to print in giving good value for us,” Byrne said in his opening remarks.

Vanessa Clifford, Deputy Chief Executive of UK-based Newsworks, provided further encouragement when she presented the results of her organisation’s recent Tablet Project, which showed responses to tablet advertising can be up to 40 times higher than online ads.

Clifford said Newsworks launched the project because while so many things about tablets are known, such as how many have been sold, how many apps there are, or even individual campaign results, a larger scale look at tablet advertising and its effectiveness hadn’t been undertaken.

As part of the project, some 20 campaigns involving major brands such as Sony, Canon, LG and Audi, were examined over three months. All campaigns ran across various national titles in the U.K. Newsworks also interviewed people about how they are using apps and how they fit into their lives.