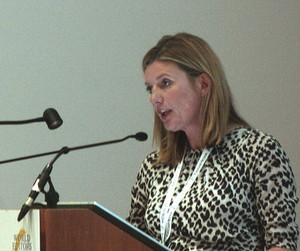 Clifford explained that Newsworks launched the project because while so many things about tablets are known, such as how many have been sold, how many apps there are, or even individual campaign results, a larger scale look at tablet advertising, its effectiveness and even the diverse terminology around it hadn’t been undertaken.

As part of the project, some 20 campaigns involving major brands such as Sony, Canon, LG and Audi, were examined over three months. All campaigns ran across various national titles in the U.K.

Newsworks talked to people about how they are using apps and how they fit into their lives. Clifford played a video for participants of some of the interviewees giving their opinions.

Among observations from the study were findings such as when using an action-oriented text link, you need to have action words to get people to use it, “press here.” Otherwise, a link alone does not get a good response rate, she said.

In summing up, Clifford offered participants these key tips regarding tablet advertising campaigns:

Click here to find out more about the study.