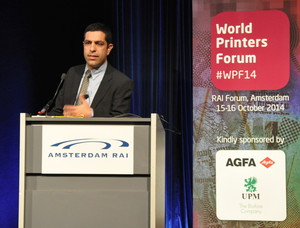 Yedioth publishes the highest daily circulation newsaper in Israel, Yedioth Ahronoth, as well as 21 local newspapers across the country and has a range of other products including magazines for men and women, and Ynet, the country’s largest and most popular news website.

However, Avrahami said, in the past few years, the group began seeing a number of problems that are also common to publishers elsewhere, such as a need to create new revenue sources due to a decrease in production, declines in profitability and excess printing capabilities.

At the same time, the company recognised there is also a wide range of potential customers for additional printing jobs such as commercial companies (catalogues, inserts, brochures – which are often then inserted into the newspaper), smaller and medium size newspapers, government agencies, local and municipalities authorities as well as associations and political parties.

Recognising that market demands required the need to be able to produce products with glossy covers, a large variety of print formats, semi-commercial products and pre-printed inserts, Avrahami said the company made several investments to be able to meet these needs.

In addition, the group needed to make investments to not only train its staff to be able to produce other kinds of print jobs but also to be able to handle sales and service of their new offerings. For example, Avrahami said they had to integrate a new CRM system to handle new customers.

These investments and efforts are now paying off, he said.

Today, Avrahami noted, they are printing work for over 90 external consumers, doing more than 120 different jobs per week. These jobs have an average printing run of 10,000 copies, with an average page count of 48.

He added that these jobs produce a significant income for the group and what’s more, they have had a very good return on their investment, reaching ROI in just two years.

Asked about the sales and marketing aspects in regards to the new printing offers, Avrahami said “I think this is really an issue because this is something new – we didn’t know how to do it in the past and you need to be very professional: You have to bring in people who are familiar with this specific market, and you have to train people. … You have to prepare yourself for it. It won’t happen by itself. We created a team.”

He also noted that currently Yedioth faces strong competition for print jobs from other publishers who are in the same situation his group is. However, he added that he believes in the near future there will be fewer printers in Israel and that will make things easier.