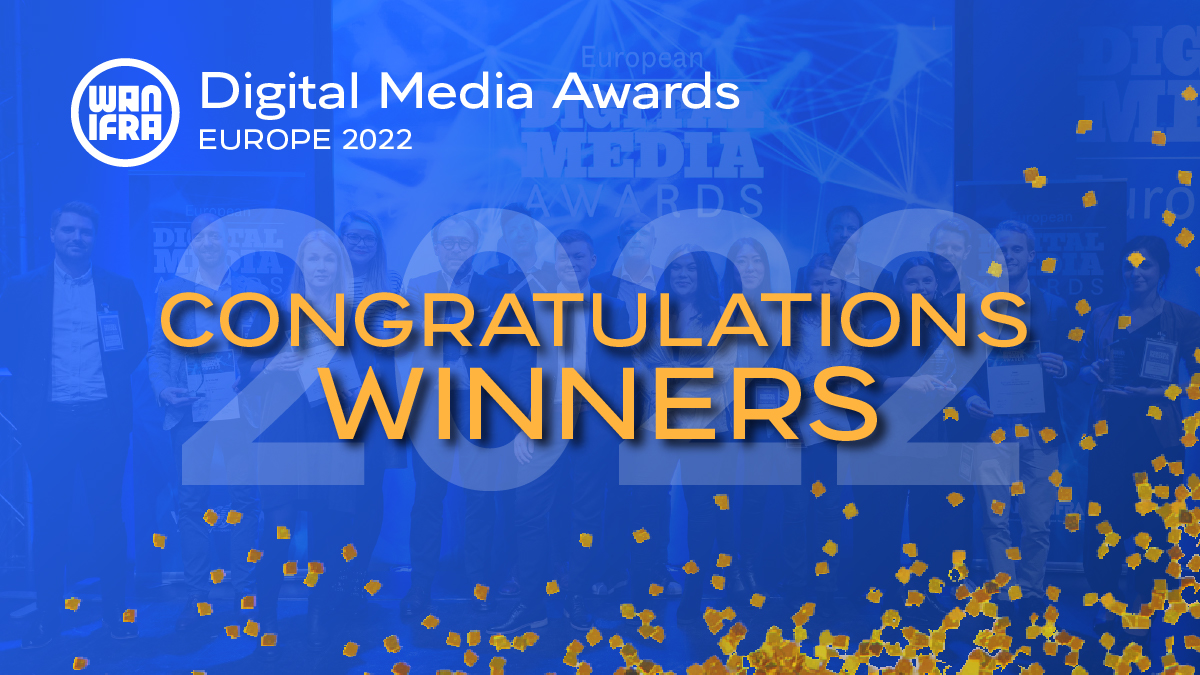 Each of these projects is exceptional in their creativity and execution, and show an impressive dedication to delivering the very best for their audiences. With remarkable cases of audience engagement strategies, to inventive and comprehensive displays of complex data. We sincerely thank all the publishers who submitted their projects this year and are grateful to our expert jury panel (see below for full list).

The first 6 winners of the first 6 categories will go head-to-head and compete against other regions for the prestigious title of a Digital Media World Award Winner 2022. The in-person ceremony will take place at the World News Media Congress (28 – 30 Sept. 2022) in Zaragoza, Spain. The last 3 winners of the last 3 categories are exclusive to the European region and launched specifically for our European members to compete against other news publishers for the continental awards.

The winners of the 15th annual European Digital Media Awards are:

DNEVNIK.hr developed a modern application that would offer a better user experience than browsers and respond to the needs of a wide and diverse target audience. The results were impressive with the number of real users almost doubling on a monthly basis. The app has a more intuitive, clear, visually attractive interface and smarter connection and presentation of content and thematic units, which encourages users to download the app on their mobile devices. Judge’s comments: “It looks very good across different platforms. Good mix of photos and videos.” “All in all it’s a really nice product that makes the user click and move on.”

During lockdown, Kleine Zeitung created the Kleine Zeitung Online Festival where Austrian Bands were invited to perform in various locations. These performances were then presented on their website. The objective of this event was not only to support the national music scene by giving young Austrian artists a platform, but also to create and offer unique content on their website to gain new users and expand our reach, especially within the young audience. Registrations to the site exceeded expectations and the project generated a lot of attention within their main target group of young adults. Judge’s comments: “This was a novel and innovative way to reach new audiences during lockdown. The pandemic forced us to think out of the box and this project succeeded in doing so. I liked it that there wasn’t any special effects such as VR around the recording of the performances – it was just about connecting musicians and their creative output with audiences in a time of need. Well done all!”

“Spain lives in flats” is an innovative journalistic project by elDiario.es that analyzes the footprint of more than 12 million buildings throughout the country to map the height and urban landscape of Spanish cities in three dimensions. The idea is to show in an interactive journey why Spain is one of the countries in the world that has built the highest and most dense cities compared to other countries. The page format and interactive visualisation are also part of one of elDiario.es’ long-term bet to give their readers informative content in an innovative format by promoting collaborative work between traditional journalists and the data and visualisation team. Judge’s comments: “An amazingly thorough look at how housing in Spain has evolved and developed. Impressively designed and deployed, especially considering the vast amount of data involved. A great project.”

DN launched “DN Leadership”, a digital subscriber only platform, offering leadership columns, high- profile interviews, organisational psychology-experts, newsletter, and webinar offerings. The key objective of this initiative was to increase and engage their female readership to ultimately gain new subscribers. To increase loyalty and higher engagement among women readers, DN created and strengthened female profiles, both external and internally. The platform proved to be very successful since its launch, converting thousands of new female subscribers, increased loyalty and most importantly, engaging their female target audience. Judge’s comments: “”DN Leadership” initiative stands out for having been able to identify and develop a product designed for a specific audience such as females, and for having been able to effectively increase engagement and conversions, with concrete outcomes in engagement and readers revenue.”

Give me all the details – Content universe – VGTV, Norway

Like many companies, VGTV was looking for a way to better engage younger female audiences when they decided to collaborate with influencer Linnéa Myhre on an entertainment podcast. The  podcast boasts around 60,000 listeners a week, 90% of which are female and 70% of which are aged 24-35. The success of the podcast prompted the team to expand the idea to include a top ten best selling coffee table book as well as a TV series, which gained almost 10,000 subscriptions for early viewing access and now has over 1 million views. Judge’s comments: “I really liked how this bold campaign worked across multi-platforms. The numbers speak for themselves but I was particularly taken about how the creators of this project had the presence of mind to create a best-selling coffee table book too. Well done to all!”

This weekly newsletter first launched in May 2021, with over 600 subscribers before the first edition was even sent, now celebrates over 3,100 subscribers. The decision to start a food-related newsletter was a two-part process. At first, the team trusted their gut feeling that there is a high interest in such topics, and then they analysed the data and learned that there are between 560,000 and 750,000 foodies in the region. Judge’s comments: “A really strong entry from the team at General-Anzeiger. There’s a lot I like, starting with how they built a cross-functional team to support this newsletter. It’s a newsletter with a clever name and a clear audience, and I think they’ve got plenty of room to continue to improve the product and grow the subscriber base. The fact that they built out an introductory section (instead of making the entire thing just a feed of stories) shows that they clearly put thought into how to build personality into this newsletter.”

Best Use of Audio as an App, Service or Series

VGTV launched a project with a clear goal: to get men to communicate better with each other about their feelings. They chose a podcast as the platform and in over 30 episodes, the host, a former professional hockey player, and his guests discussed themes such as bullying, loneliness, substance-abuse and anxiety. They succeeded not only in creating a different podcast about mental health, but also in engaging one of the most vulnerable and hard-to-reach groups on the subject of mental health. Over 61% of the listeners are men, and over half of them are between the ages of 18 and 27. In total the podcast has impressively 1,5 million downloads. Judge’s comments: “Really nice project with excellent results. And it is extremely rare to have a format with so much emotion – it is perfect for podcast and instagram marketing to get the audience involved.”

17th of May is Norway’s independence day with street celebrations. Due to lockdown restrictions and cancellation of the event, VG decided to take part in building the biggest event in Minecraft in Norway ever in history and be a platform for interaction with younger audiences during such an important day in Norway. The goal was to offer gen-Z a positive and fun independence day and interact with VG. The level of engagement reached with younger audiences was beyond expectation. Judge’s comments: “This is a great example of reaching out to an audience so difficult to draw to a legacy brand via traditional channels. Once again VG shows how creative they are!”

Creole is the second language of Lisbon; however, it is still very much overlooked. The voices of creole speakers are then absent from the media – and their stories remain mostly untold. As a community media outlet from Lisbon, Mensagem de Lisboa decided to work with and for the creole-speaking community, as an important community in town and began a pioneer project: doing written journalism in creole. Engagement with this community grew and continues to grow. Judge’s comments: “this is Diversity and Inclusion in action. At a time when so-called “cultural minorities” find it hard to be fairly represented in mainstream media, Mensagem Creole Project has given them a voice. Not only that, the project has put them at the center of the editorial mission. These are not external journalists looking in – this is a community speaking out. The audience is not only engaged – it seems they are co-creating content.”