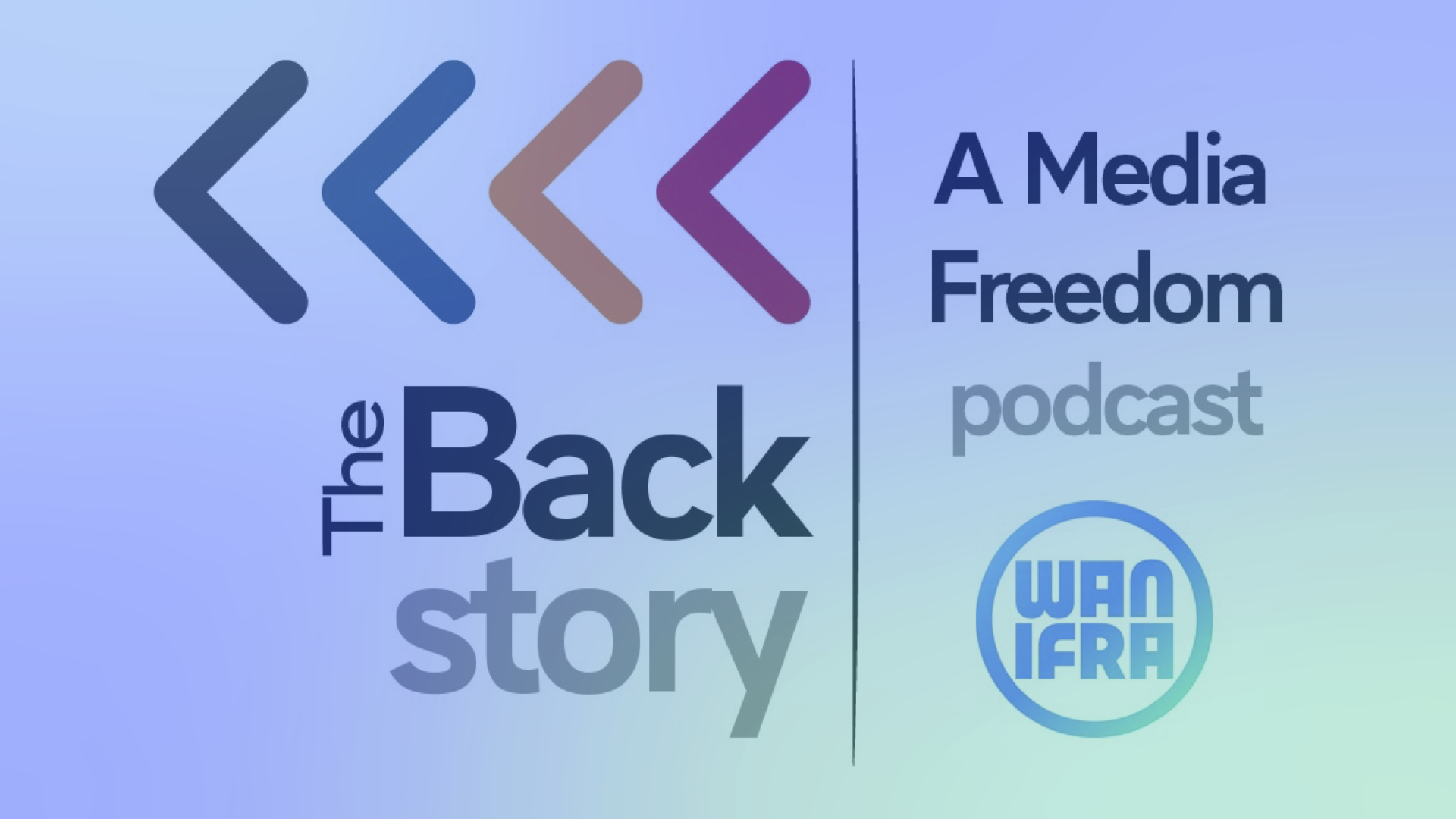 
You can listen to each episode direct from our website, but we do encourage you to subscribe to ensure you don’t miss our show. The following links will take you directly to iTunes or Stitcher.

Your feedback is very welcome, and please also rate us on whichever podcast platform you use – it’s always great to get the word out!

Join us for season 4 of The Backstory as we explore the challenges facing media across Africa.

News organisations around the world are facing a new digital reality. In order to survive, they must not only hold onto their audiences, but also build new ones. How are African news media using innovation to address these issues? While innovative ideas tend to be tech-focused, the fundamental issue for many African media organisations is not just about technology, it’s also about how the news itself is reported and presented – and especially, how the continent is portrayed, and the narratives around it.

What are the threats and challenges facing reporters who cover Africa’s biggest stories? How have threats evolved over the years, and what support do journalists have? Three journalists talk about their experiences of covering three very different, uniquely challenging beats (environment, elections, LGBTQ+ issues), and how they get to the story while keeping themselves and their sources safe.

S4E3: Meet them where they are: how media can reach youth in Africa

Africa’s youth population is booming and it’s a demographic that cares deeply about the issues that affect our world. But capturing the attention of young people means understanding what news they want and how they want to get it. Legacy media across the continent are reassessing their offer, while innovative platforms featuring images and video are growing in popularity. In this episode of The Backstory, we’ll look at the ways in which news organisations across Africa are trying to attract – and keep – younger audiences.

Investigative journalism is the lifeblood of media, but it is also the most expensive element of any media operation. Yet even as resources to produce investigations dwindle, journalists in Africa continue to dedicate themselves to in-depth reporting into the most serious issues on the continent. Donor-funded investigative centres or platforms have been created to fill in the gaps of legacy media, which often struggle to support this kind of journalism. But are these centres stripping the media companies of their investigative talents, or are they filling badly needed holes? And how hard is it to actually get the job done?

S4E2: Where is the money? Financing African media

In a time of exceptional crisis for newsrooms and media companies everywhere, African media are facing huge financial challenges. But this time of uncertainty is also forcing media companies to find innovative ways of coping. Where is the money coming from, and how is the digital transition helping – or hindering – a future economic model? In this episode, we look at the struggles that African media companies are confronting, and the solutions they are finding.

It’s been 30 years since the Windhoek Declaration for the Development of a Free, Independent and Pluralistic Press was born on May 3, 1991 in Namibia, to support independent media in Africa. The declaration was not only a proud moment for African journalism but inspired the United Nations to launch World Press Freedom Day two years later.

Though some countries across the African continent have made press freedom gains since then, many continue to struggle with journalist safety, independence and financial pressures. In this episode, we look at the press freedom challenges facing African media and what steps are being taken towards improvement.

Join us for season 3 of The Backstory, in conjunction with WAN-IFRA’s Women In News programme.

S3E6: Wellbeing and resilience: How women journalists are navigating COVID-19

The COVID-19 pandemic has focused attention on issues that have been taboo in many newsrooms for a long time: mental wellbeing, stress management, technological burnout and limits between personal and professional life. For women journalists in particular, where there is an expectation to remain productive under demanding circumstances, these challenges have been compounded. What can journalists to improve their own wellbeing and resilience? And what should editors and managers be doing to better support their teams?

Join us for this last episode of Season 3 of The Backstory, and be sure to catch up on previous shows – and Seasons 1 and 2 – that you may have missed and can find below. See you soon for Season 4!

S3E5: You better be prepared: addressing sexual harassment in the media

Sexual harassment happens everywhere, and media organisations are not immune. Addressing it is good for journalists, and for the media business in general. How can organisations create a work culture where sexual harassment does not happen? How can they identify it, and address it when it does happen?

The Backstory: A media freedom podcast · You’d better be prepared: addressing sexual harassment in the media (The Backstory S3E5)

Journalists should be committed to reporting facts and presenting the news in an honest way. But when they use their reporting to give a voice to those who are under-represented – to victims instead of perpetrators – they have the power to create social change. In this episode, four journalists from Latin America, the Middle East and Africa talk about the unique opportunities they have as women to make a difference in their societies through their reporting on climate change, indigenous communities, migration, press freedom, health and women’s rights.

Technology has revolutionised how we get our news. Data visualisation and multimedia are increasingly used to tell stories, and coding is no longer just for computer scientists. But when it comes to working with digital technology, in most newsrooms men outnumber women. Why are men still dominating this field? And what does it take for women to get ahead?

Women in leadership, diversity in the workplace – these are catchphrases that media organisations are talking about, but what do they mean? Why is it important to have women in top positions? And who are the women who are already there?

S3E1: Where are the women? Finding gender balance in the news

Men’s voices and men’s perspectives account for roughly 75% of the news. Yet, women make up half the population. Research has shown that stories that feature women are more widely read by women. So, why does this imbalance persist?

Protests have become more frequent, and more violent, around the world. Covering them has become increasingly dangerous for journalists, and has required new ways of thinking and acting. This episode puts safety issues into the context of covering protests. What are journalists and editors’ experiences? What should they be thinking about?

A contract may seem like an afterthought for a freelancer, and it’s not obvious how it is linked to safety. But contracts should be a part of every journalist’s conversation with an editor, especially when the assignment involves risk. What should journalists be asking for? And what should editors and news organisations be thinking about?

S2E4: The Cost of Safety

Journalists, editors and security managers help us start to understand how money can be a safety concern in itself, especially for freelancers who are often left on their own to negotiate budgets and insurance coverage.

S2E3: The war online: Abuse and harassment, and what journalists are doing about it

Journalists are increasingly the target of insults or threats from individuals or groups online, which can have physical impacts and should no longer be seen as separate from the offline world. The goal of the harassment? Censorship. And women bear the brunt of the abuse, which is usually gendered and sexualised. Journalists have developed ways to deal with online harassment, from shutting down social media accounts, to confronting abusers, to advocating for change on a systemic level. In this episode, we hear about how that works.

S2E2: Talking About Trauma. Valuing Mental Health as Much as Physical Safety

Many journalists see and even experience some kind of trauma, whether they’re covering a conflict zone, protests or violent crime, and they can experience anxiety, depression or even PTSD. One of the best ways of coping is to talk about the experiences and the feelings they evoke, but few people do – journalists or their editors. Trauma is considered part of the job; but ignoring it only makes it worse. In this episode we look at moral injury, the kind of trauma journalists can experience, and the symptoms they might exhibit. And how to value their mental health as much their as physical safety.

S2E1: Managing safety: What editors can do to keep journalists safe

If journalism protects democracy, then who is protecting journalists? The important role editors and managers play in keeping their reporters safe. In this episode, we hear from editors and safety trainers about starting the safety conversation in newsrooms, to make safety a priority rather than an afterthought. Learn about actual situations that journalists and editors have found themselves facing, and get tips on how to start putting in place safety protocols in your own newsroom.

S1E6: Soft censorship, hard impact – How governments manipulate media
It is increasingly rare to find instances of direct censorship of media in the world today. But indirect censorship, called soft censorship, is thriving. It manifests itself through government pressure on media groups through advertising decisions and restrictive legislation. Less violent than kidnapping and murdering journalists, it is as existential a threat to journalism.

S1E5: Fact or fake? Navigating the age of misinformation & fake news
Journalists and news organisations today are seeing a shift in the use of social media, from engagement to propaganda and the spreading of misinformation, or so-called fake news. Facebook and other tech platforms are increasingly under pressure to change how they present information and sort truth from lies. But journalists themselves are also coming up with solutions. This episode looks at their fight to control the narrative of a given story. It’s a fight against propagandists, whether governments or online activists.

S1E3: Social media and journalism: The good, the bad, and the ugly
Social media is just that: social, connections, engagement. It has opened up new channels for journalists to connect with their audience, but with mixed results. With the rise of trolling, online harassment and the manipulation of social media, how do journalists and editors see its role today? How are journalists adapting? How can they move forward in these seemingly chaotic times?

S1E2: Show me the money: Censorship + financial independence
How do you run an independent media organisation in a country where the government imposes censorship rules? How do you support a successful media company without folding to pressure from your funders or your sponsors? The internet has exploded traditional media funding models. And yet, in some parts of the world, legacy media – even print! – remain a strong source of independent information. How are these companies surviving?

S1E1: Dying to be a journalist
In the first episode of The Backstory, we start with the basics: the threats facing journalists worldwide. Too often, journalists put safety aside to “get” the story; editors don’t anticipate the problems that their reporters or their newsrooms can face. How can journalists be prepared? What should editors think about?